(Reuters) – McDonald’s Corp said on Monday it had initiated a process to sell its business in Russia after 30 years of operating its restaurants in the country, following Moscow’s invasion of Ukraine.

In March, McDonald’s closed all its restaurants in Russia including its iconic Pushkin Square location.

As part of the exit, the company expects to record a non-cash charge of about $1.2 billion to $1.4 billion.

“The humanitarian crisis caused by the war in Ukraine, and the precipitating unpredictable operating environment, have led McDonald’s to conclude that continued ownership of the business in Russia is no longer tenable,” McDonald’s said.

This is a breaking news story. More to follow…

The end of an era: How the closure of McDonald’s 850 restaurants in Russia 32 years after it first launched in Moscow marks the end of the west’s engagement with post-Soviet Russia

When it first opened its doors in January 1990, 30,000 Russians who had lived under the iron fist of Soviet rule queued to get their first taste of McDonald’s Big Mac.

The fast-food giant’s first Russian outlet opened in Moscow’s Pushkin Square, and caused such excitement that some people joined the huge queue for the restaurant without knowing what it was for.

By the end of the day the store had set a new opening-day record for the company and more than 27,000 people applied for waiter jobs. Only 600 were hired.

The famous Golden Arches, which were iconic in almost every corner of the globe, had finally reached beyond the Iron Curtain and soon became a symbol of Soviet acceptance of American capitalism.

With the fall of the Berlin Wall months before and the vast Soviet Union beginning to crumble away, the McDonald’s store had became an unlikely cultural touchstone that would represent a thawing relations with the end of the Cold War.

McDonald’s announced in March that it was closing all of its outlets in Russia – including its famous original outlet following Vladimir Putin’s invasion of Ukraine.

Their move followed similar withdrawals made by Coca-Cola, Pepsi and Starbucks, plunging Russia further into international isolation – after three decades of engagement with the West.

The BBC’s Steve Rosenberg, who was in the queue at the Moscow McDonald’s when it opened said its closure was ‘hugely symbolic’. 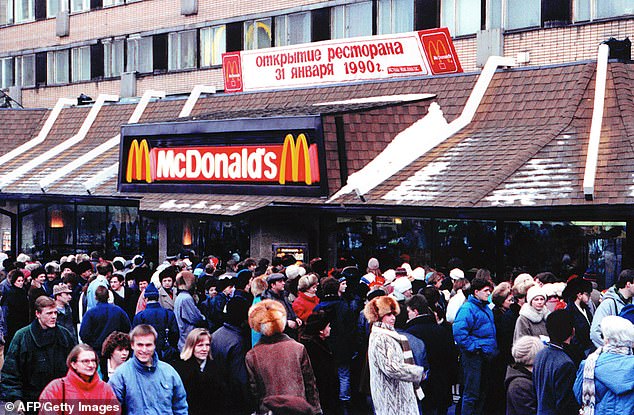 McDonald’s announced yesterday that it is temporarily closing all of its outlets in Russia – including its famous original outlet following Vladimir Putin’s invasion of Ukraine. Pictured: Queues on opening day of the Pushkin Square McDonald’s

The famous Golden Arches, which were iconic in almost every corner of the globe, had finally reached beyond the Iron Curtain and soon became a symbol of the power of American capitalism as the Soviet Union collapsed. Pictured: An elderly Soviet woman eats a hamburger at the Pushkin Square restaurant on opening day

Journalist Yuliya Chernova, who was a young child when Russia’s first McDonald’s outlet opened, recalled yesterday the ‘deliciousness’ of a milkshake when she tried it for the first time.

The Pushkin Square McDonald’s opened on January 31, 1990, around 18 months before the Soviet Union collapsed. It was American giant’s 11,201st store.

It had taken 13 years of negotiations before the Soviet authorities allowed the venue to open. The discussions began in 1976 and were led by George A. Cohon, the president of McDonald’s Canada.

It then cost $50million to get the operation up and running.

The restaurant chain’s most famous burger – the Big Mac – was known in Russia as the Bolshoi Mak, with bolshoi meaning ‘big’ in Russian.

The Daily Mail’s original reporting of the Pushin Square venue’s opening described how some Russians arrived before dawn in the hope of getting their hands on burgers and fries.

Such was its popularity, the queue to get in the venue ended up being more than 90 minutes long.

McDonald’s Mr Cohen said of the outlet’s opening, ‘It’s been a long, long road. It’s also been worth every drop of sweat.

‘Today is the most exciting day of my life, and I salute all those who have come along this path with me.’

One 18-year-old customer told the Daily Mail at the time: ‘I’ve seen places like this in American films but I wondered if I would ever be in one.

‘For months I’ve watched this building being prepared.’

Another added: ‘I’ll be here every week. It is already my favourite food.

Other amazed customers told the New York Times that the ‘Bolshoi Mak’ was ‘something like you’ve never tasted before.’

‘You take a bun, a very tasty bun, and you cut it in half. Then you add some grilled meat, top quality meat, mind you, not like the meat we get here,’ they said.

‘Then some cheese, then very many vitamins and then you add some spinach. And that, comrades, is the Bolshoi Mak.’

It was not only the customers who were scrambling to get through the restaurant’s doors. Of the 600 jobs that were advertised, around 27,000 applications were received.

When the venue opened, restaurants in Russia were known for their terrible hygiene, lack of menu options and poor service.

The feelings about the lack of choice were made clear by another customer, who told The Washington Post that ‘finding a decent place to eat is one of our biggest problems’.

‘This place looks different just from the outside. Everything is so clean and bright,’ they added.

However, because of the low wages of nearly all people in Russia, eating in a McDonald’s venue was a luxury, rather than the cheap option it offered in Western nations.

One customer said: ‘We certainly could not afford to eat here every day. This is a high-class restaurant by our standards.’

The Pushkin Square restaurant was welcoming to all however, with a brass sign outside declaring ‘For Soviet rubles only’ in a dig at other restaurants nearby that would cater to westerners with more easily convertible dollars or pounds.