The meme stock craze may have just ended in a flash. On Thursday morning, stock-trading app Robinhood announced it was restricting users from buying new shares in GameStop, AMC, and BlackBerry.

“In light of recent volatility, we are restricting transactions for certain securities to position closing only, including $AMC, $BB, $BBBY, $EXPR, $GME, $KOSS, $NAKD and $NOK,” the company said. Users who own the shares can now only sell them.

The companies’ stock prices had all been soaring, thanks to users on a Reddit forum called r/wallstreetbets, which has 4.5 million followers. They banded together to buy shares in companies that hedge funds were betting against.

The biggest winner has been GameStop, a struggling video game retailer that saw its stock price balloon from $17 on Jan. 1 to an insane $347 yesterday. As a result, some users on wallstreetbets reported raking in tens of thousands, and even millions, of dollars from the stock buy. 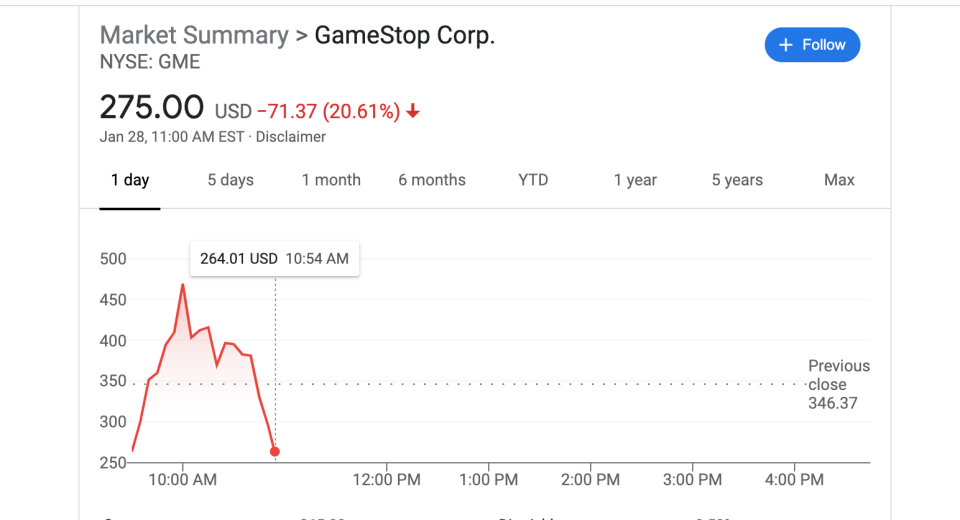 But now the party may be over. After Robinhood announced the new restrictions, prices for many of the affected stocks tanked by as much as 30 to 50%. GameStop, for example, was trading at $469 a share earlier this morning only to fall to a stunning $264.

In the announcement, Robinhood—which offers commission-free stock trading—said its mission has been to “democratize finance for all.” Nevertheless, the company is indicating the meme stock craze has devolved into gambling.